Macaroni About 40 km north-west of the South Orkney Islands

Today I was helping Ryan Saunders and José Seco to count Antarctic Krill, Euphausia superba. Krill means "whale food" in Norwegian and it certainly takes after it's name! We have seen lots and lots of Fin Whales gorging themselves on these small crustaceans over the past few weeks. A group of Antarctic Krill is called a swarm and believe me, there are some large swarms around the South Orkney Islands. Lots of penguins and seals breed on these islands and Antarctic Krill is one of their main food sources.

By sending sound waves vertically downwards from the ship, scientists on board can see the outline of the krill swarms on their instruments. 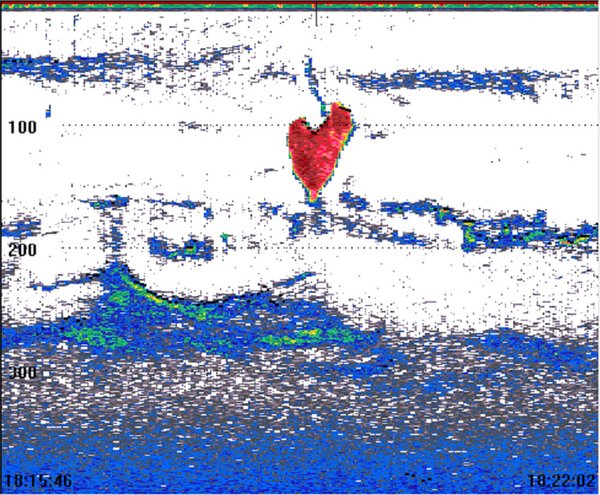 Unfortunately, they are not able to see individual krill, but by catching a small sample from a swarm, they are able to better understand what the Antarctic krill population is like in this area. 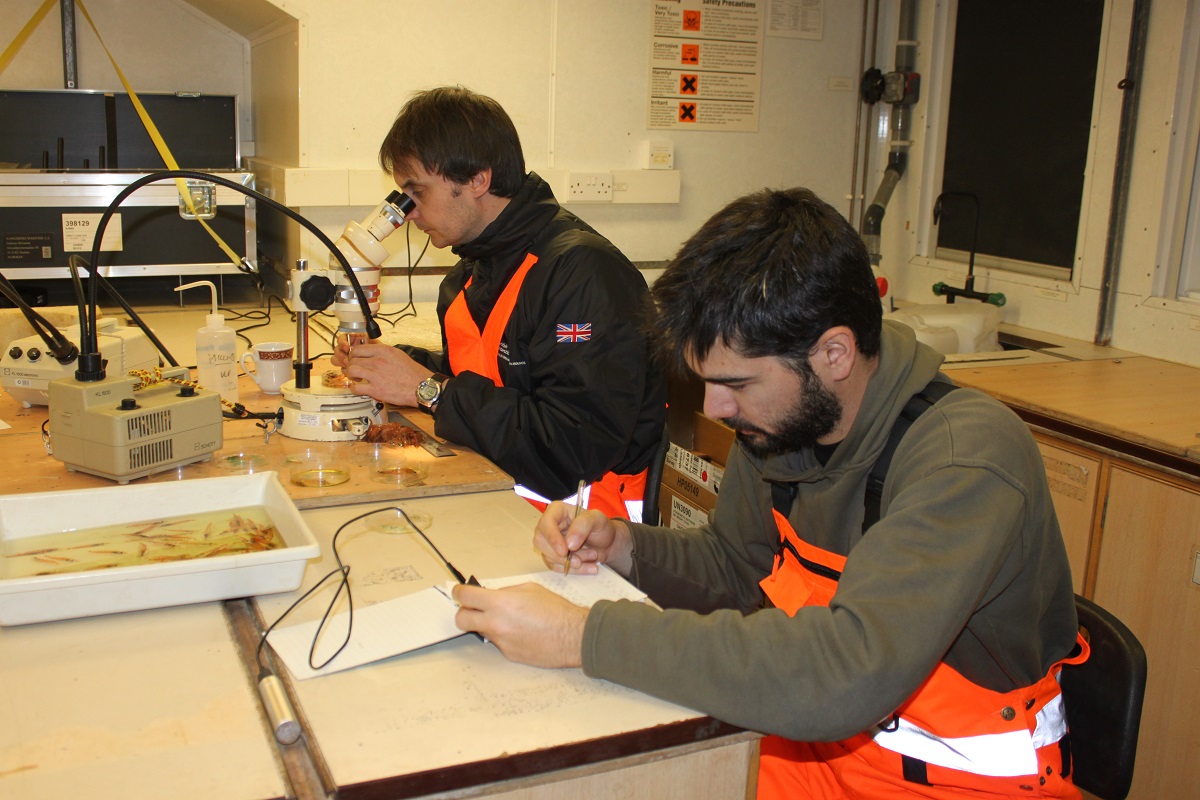 So what exactly were Ryan and Jose doing? Ryan was looking down a microscope to study the Antarctic Krill in more detail. By looking at the underside of each animal, he was able to tell if it was male or female. Nobody knows how to determine how old krill are: instead we can see what stage they are at in their development. Finally, with José's help, Ryan was measuring the Antarctic Krill (they are roughly the length of your little finger).

And where did I come in? José was using me (see the script that I was interpreting) to count the number of Antarctic Krill that they had sampled in each age group. Every time he pressed the button, the LED moved along one notch. This means he didn't have to keep track in his head of how many had been measured!! 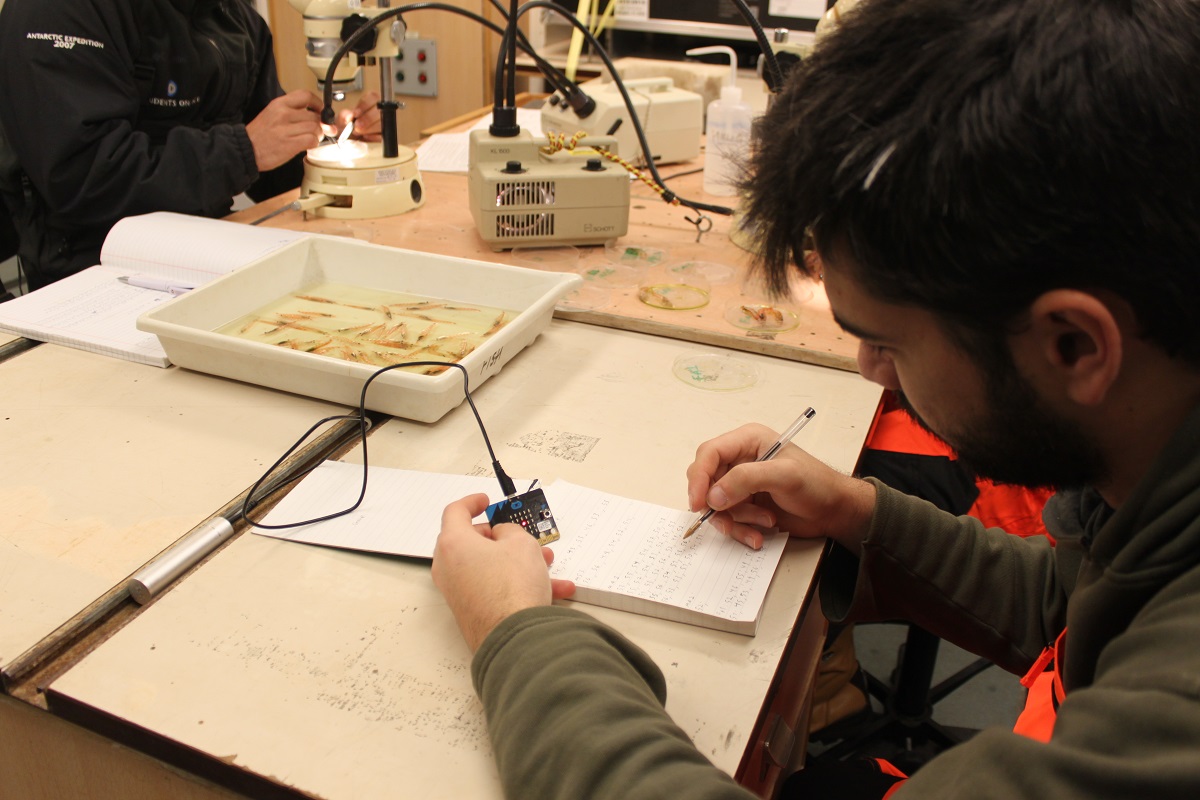 On a slightly different note, I am named after Macaroni Penguins, which breed on sub-Antarctic islands, such as South Georgia. My namesake penguins really like to eat Antarctic Krill too, but we haven't seen any on this trip. 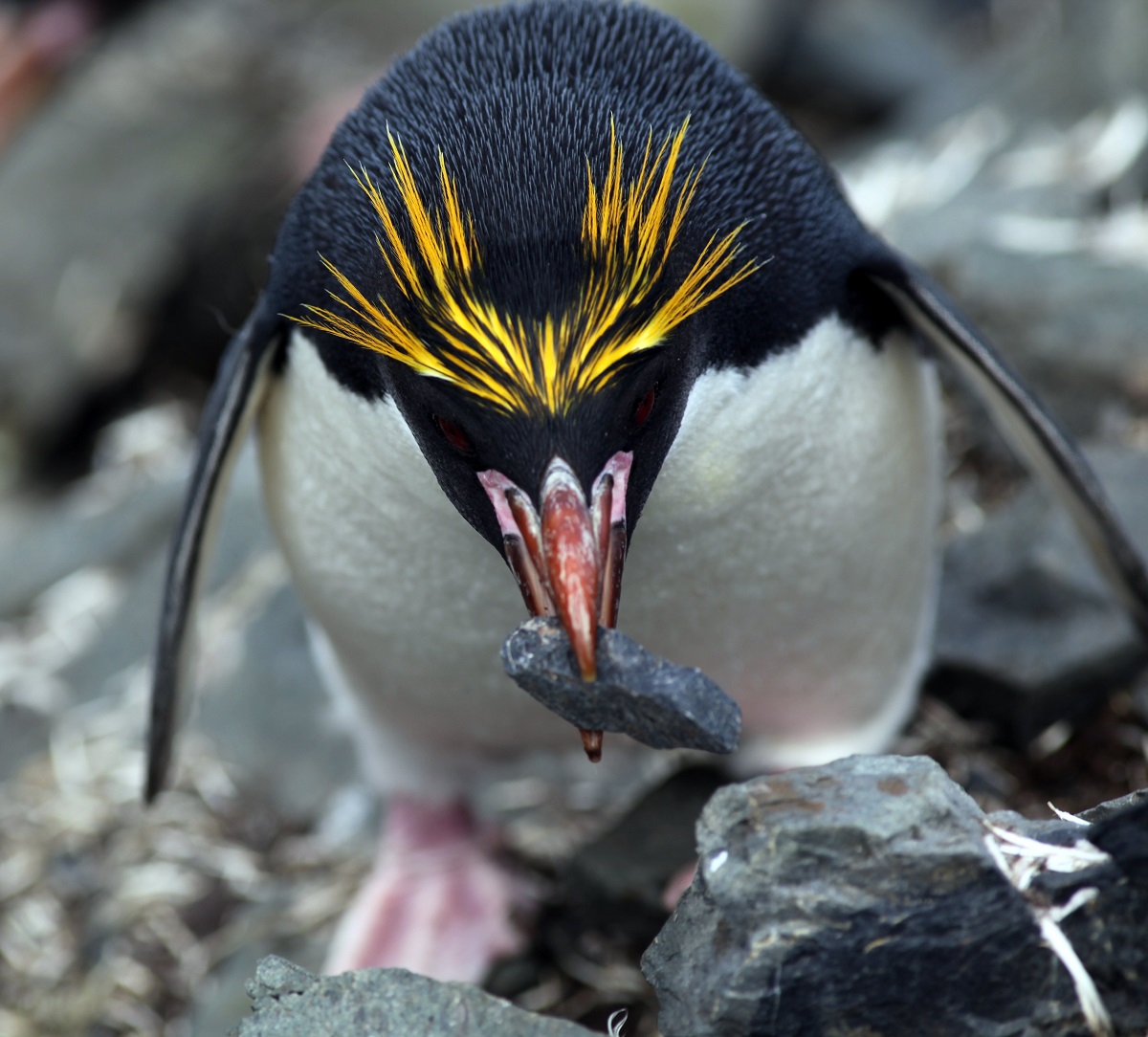 We have reached the southernmost location on our trip - 62 degrees south of the equator! Here I am outside on the very top of the James Clark Ross ship measuring the temperature. It was minus 3 degrees Centigrade. I wasn't too pleased with the tempearture (I'm only happy if the temperature is above 5 degrees as you can see in the script that I interpreted), but hey, I can't be sad in the Antarctic so here I am smiling instead! It is summer here so it's not too cold at the moment. 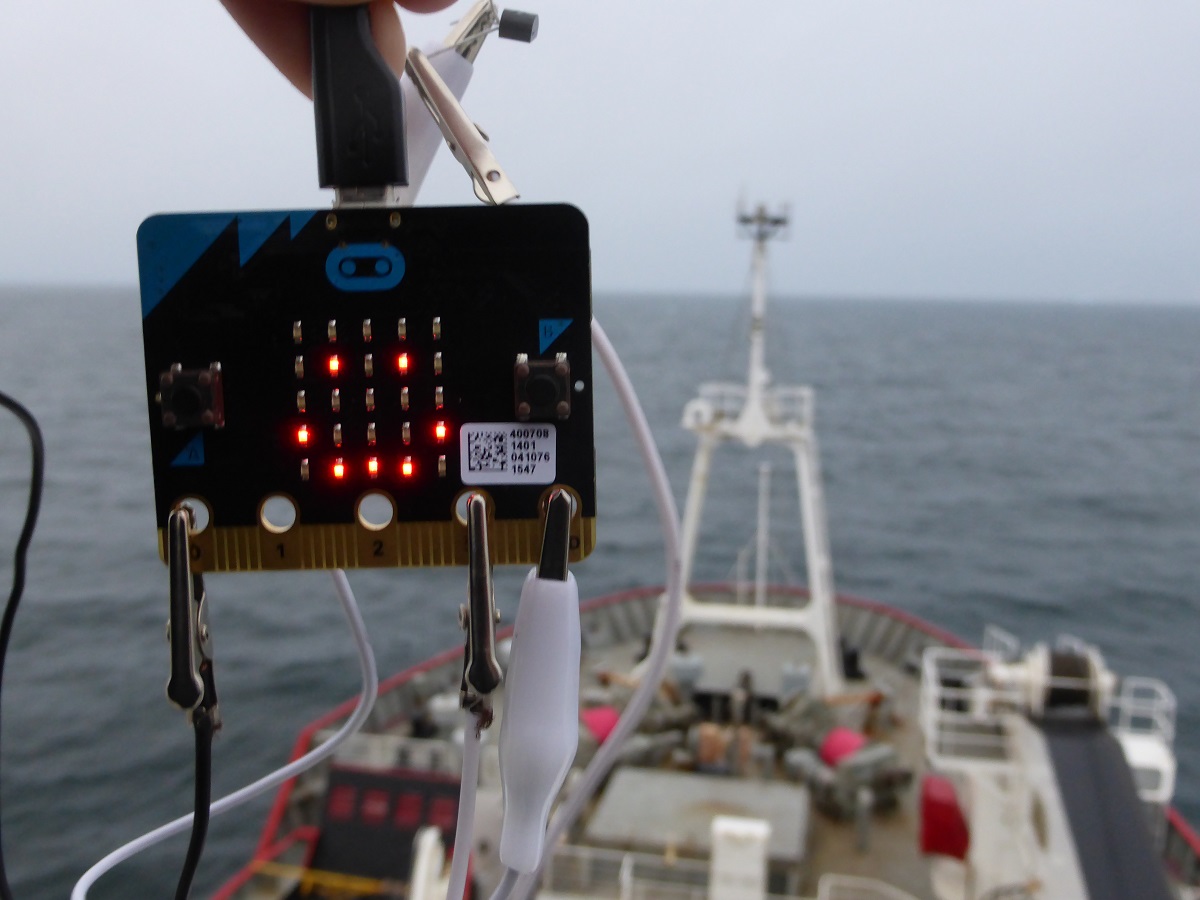 You can see the small thermistor I need to measure the temperature. It is in the top of the photo - it is the small black thing to which the crocodile clips are attached. I went outside from a balmy 17.9 degrees and in the 5 minutes it took to walk up the four flights of stairs I measured 5 degrees. In the background of the picture you can see the front of the RRS James Clark Ross. Scientists from around the world (we have eight different countries represented amongst the team) have come here to study where penguins, seals and other predators of the Southern Ocean are foraging and where their prey can be found.

After a bus ride, two long haul flights with a stop in Ascension Island and another bus ride, I have finally made it to Stanley in the Falkland Islands. You can see me here looking at the view from the RRS James Clark Ross, the Natural Environment Research Council (NERC) research ship that is operated by the British Antarctic Survey. 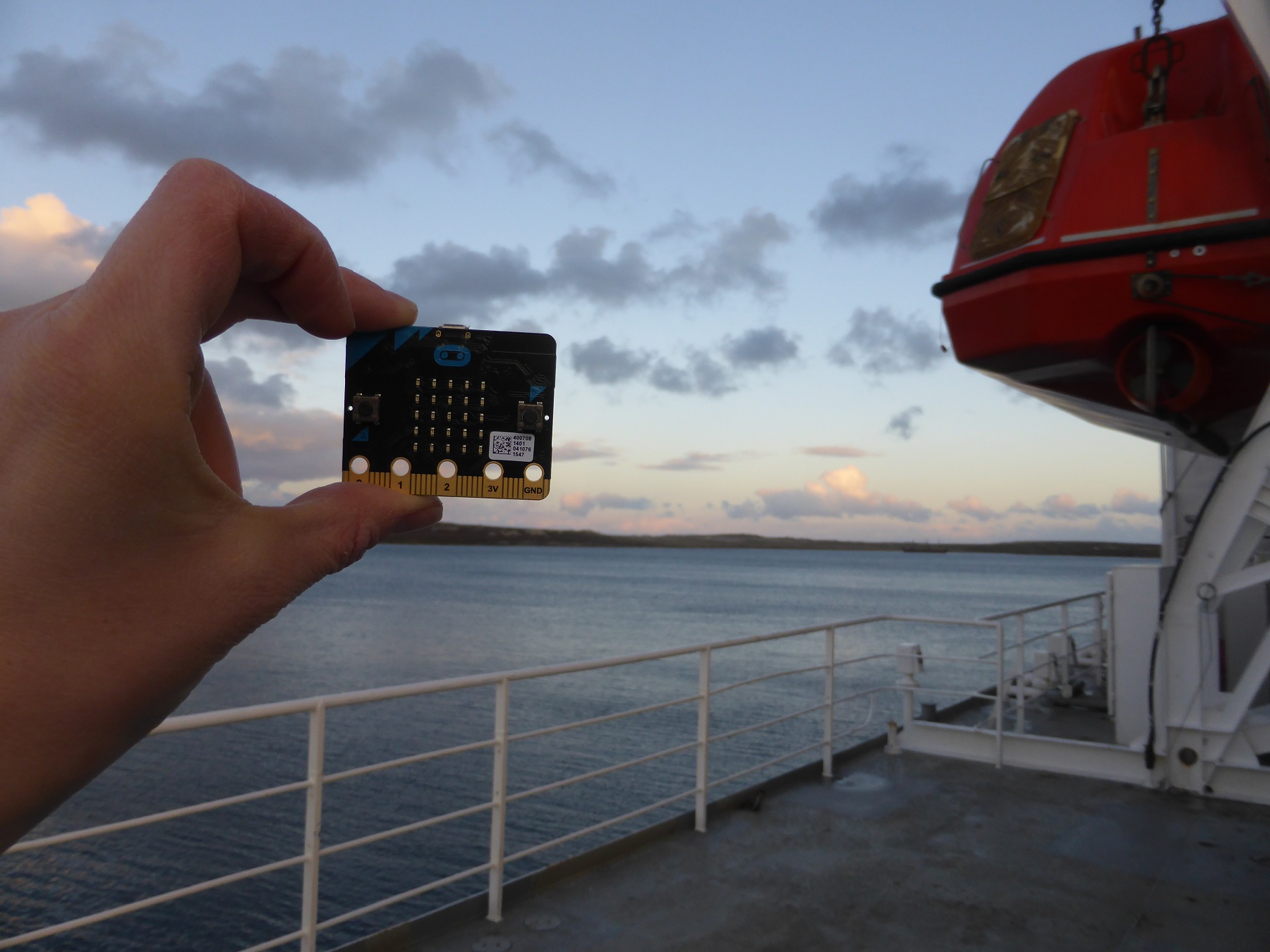 Despite it being summer here, it is a nippy 4 degrees with a brisk wind and the occasional snow shower passing through. I'll go outside soon to check the temperature using the thermistor.

George K from Mendeley found reading the numbers a bit difficult. Then he prepared a new number representation: I can now show 2 numbers at the same time without scrolling!

For example, you can see the number 12 and each digit only uses 2 columns. With my 5 columns I can show 2 numbers without scrolling: 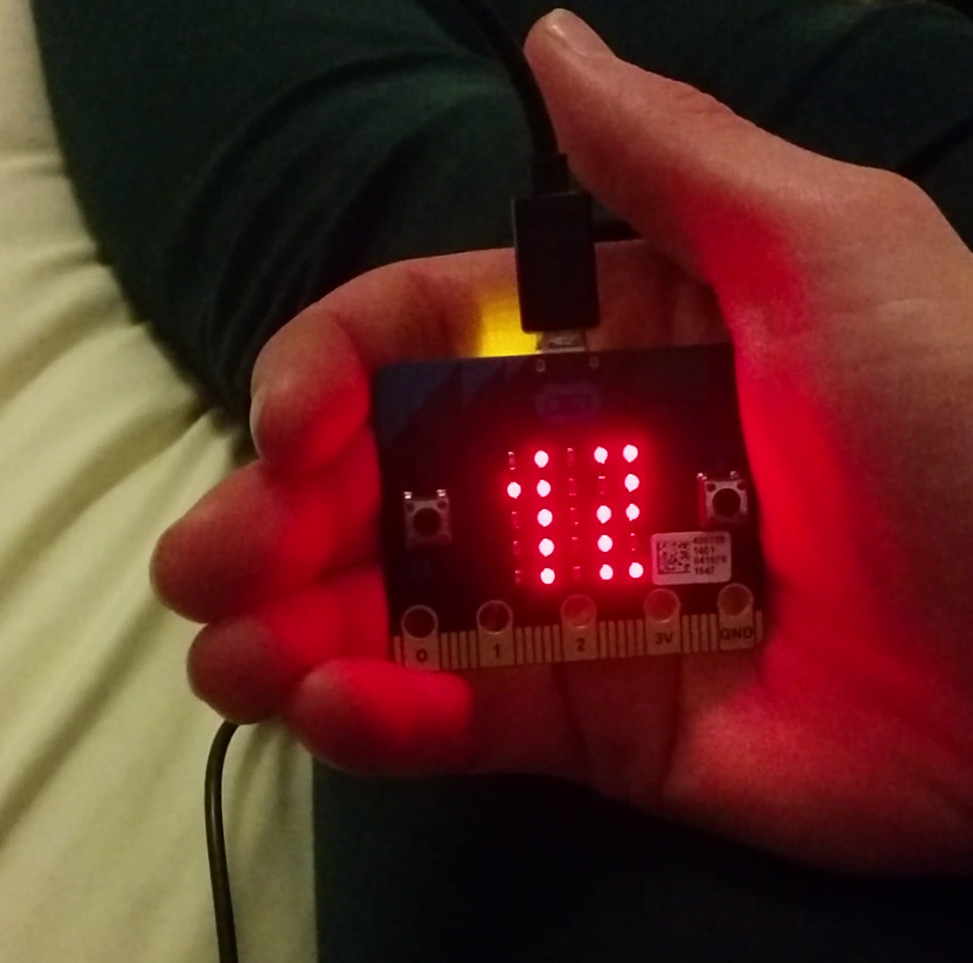 And this is some code for testing the George K numbers. I like them!

I was taken to the Mendeley office to verify that I could measure the temperature... of course I could! I'm very precise!

See me on the photo next to a PyCon UK rubber duck! 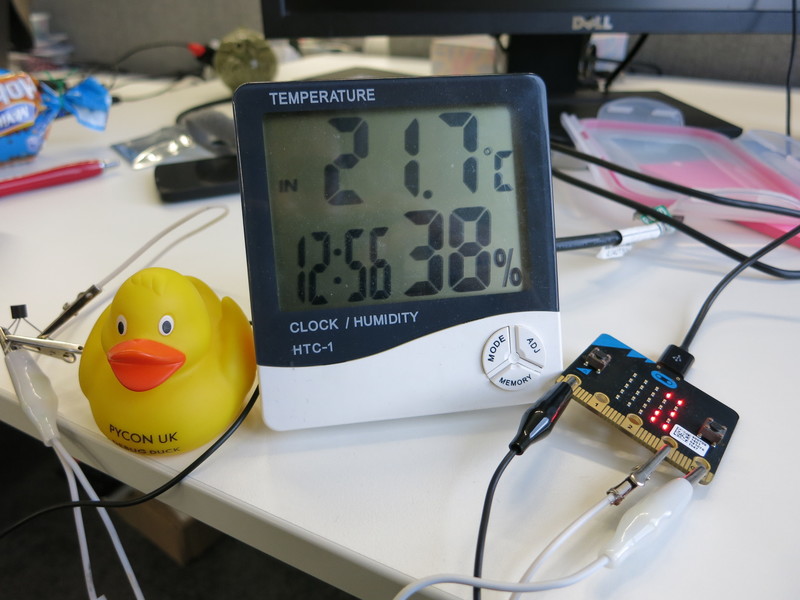 Whilst measuring the temperature, some penguins and a special snowman that live in north London came to say hi and pass good wishes to their friends from the Antarctic. 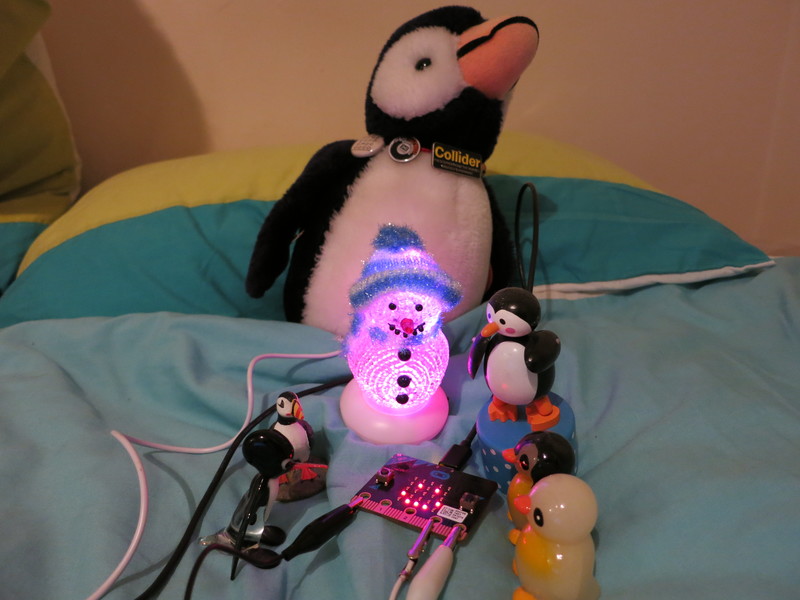 Funnily enough we had some problems measuring the temperature: not because of me but they connected to me a transistor instead of a thermoresistor! So I couldn't give any good results for a while. Luckily the sorted it out!

Wow, they took me to the Chilterns! It was muddy but luckily I had a piggyback. I learnt a few things that will be useful to keep the researchers entertained whilst on a ship for six weeks!

For example, I'm going to help the researchers to cast their votes (if they need to cast votes... let's see!). I can also measure the temperature (I don't want anyone to be too cold!) and, if they need to, they can play heads or tails with me. I'm sure that I'll learn more things.

You can see me near the fireplace... getting ready for the the Antarctic! 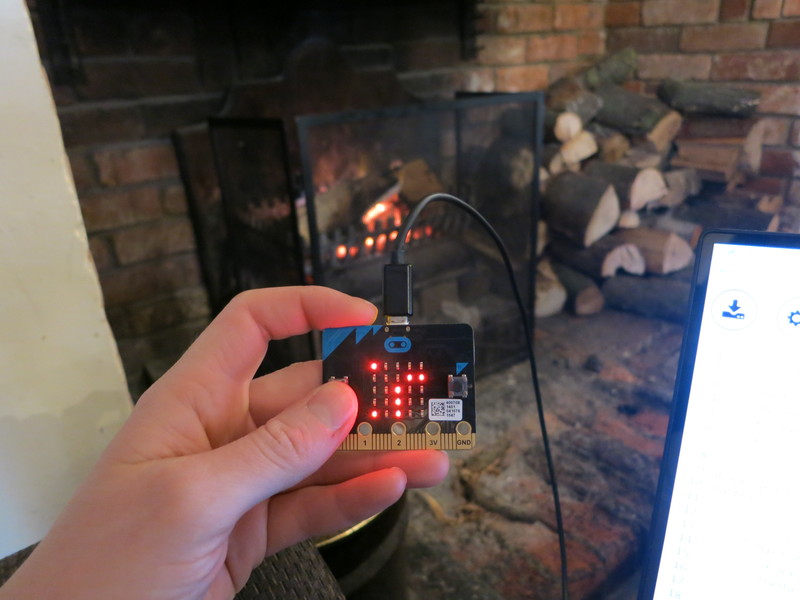 Hi, I'm Macaroni the BBC micro:bit. I was given by Nicholas to Jen at January's London Python Code Dojo. Then I was told that in one week I would be going to the Antarctic! I'm going to learn how to do things with MicroPython to help Jen do her research as part of the British Antarctic Survey.

More updates soon... I may be some time.